Tobe Jensen, President of the ANA from 2010-2012 recounts the history of the ANA during that time in the following article: 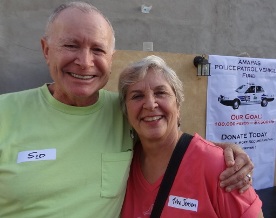 With Sid Goodman, co-founder of www.Taxisafepv.com

“The ANA was re-started in 2010 to address development issues in our area.  A number of active people were very concerned about the Pinnacle/Signature project and we saw the ANA as a vehicle that could be helpful.  There had been an Amapas HOA earlier which was created to address the issues of explosive growth in Amapas but, when the President moved away, it sank from inertia. After re-establishing the group and electing officers, we created a website for membership information and communication, a membership card with discounts at local establishments, a Neighborhood Watch program, and joined with Emiliano Zapata business group to better communicate with the city and address mutual problems in the Zona Romantica.

As such, officers attended meetings with the mayor and other local officials and were successful in limiting noise problems from beach restaurants. We also put pressure on Volvox to address their noise and standing water problems by bringing in city inspectors.  We established topes on Calle Hortenicas as well as filling in potholes and removing landslides. We helped improve the stairs from Calejon de Igualdad and worked with Transito to install mirrors on blind corners.  We monitored the Pinnacle project and met with city officials, wrote letters, and managed to pressure the city to reduce the height.

The next year, 2011, we rejoined the business leaders in Emiliano Zapata and met with the Chiefs of Police, Fire, and Transito to address issues of safety and crime by increasing patrols. We also blessed your ad hoc group to address our local crime wave. We continued to address the Pinnacle project, sent letters of concern about the project’s violations to the Prosecutor and met with Pinnacle senior staff to address concerns about the building, construction noise, and environmental impact.

Eliminated a dengue threat from Volvox site by working with city departments.

Developed a contract with Transito to improve street safety and parking by painting yellow zones, putting no parking signs and hanging convex mirrors on blind corners on Hortencias and Los Pinos.

Again, removed a landslide, filled potholes and installed a concrete grid on Hortencias.
As far as Pinnacle is concerned, board members attended meetings as far away as Guadalajara and managed to reduce the size of the project by seven floors and two subfloors.

In addition, we worked with Carolos Asuna, a local developer and businessman, to forestall the building of a federal highway through our neighborhood.  We wrote letters to the Departments of Planning and Development at the state level.

In terms of developing the organization, we established a second tier of neighborhood involvement by establishing a building and neighborhood coordinators. One result was creating a table at the Saturday market at Paradise Community Center for increasing membership and raising awareness of the organization.

Established an alliance with Conchas Chinas membership group to increase communication and support.

We expanded our sponsorship program for restaurant and business discounts and increased funding from sponsors. ”