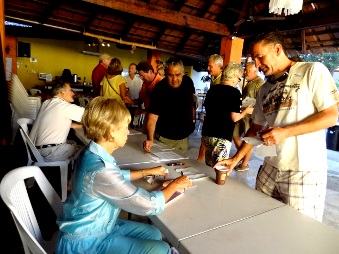 Don Pickens announced that we had a quorum and Gene convened the assembly at 10:30 AM.

Tom introduced Pastor Ric Lehman who welcomed members of the Assembly to the ParadiseCommunity Center for a second year.  Ric gave a description of how the Center serviced the whole community of Vallarta and encouraged our membership to participate in the daily activities sponsored by the Center as well as outside groups that used the venue for their various   programs and events..  He advised that all profits go to CompassioNet Impact which is a non-profit charity that provides opportunities for people living in chronic poverty to transform their own lives.  He applauded the work of the Association and is very proud that the Center is located in Colonia Amapas.

Call for a Vote.  Larry Leebens moved to approve the 2012 General Meeting Minutes.  The motion was 2nd by Peter Chao.  Motion to accept the minutes carried without opposition.

Tom reported the Accomplishments of the Association for the year 2012:

The MOST VISIBLE accomplishment was the PATROL CAR.  Together we raised over 120,000 pesos in donations alone.  Other than having an all-inclusive use patrol for Amapas, the ability to purchase the car has raised our profile with the City opening other, unexpected doors.  One of the fringe benefits is enforcing no-parking and limited parking areas primarily on Los Pinos.  Also, every member has the Emergency cell phone Number (322 146-9209) that rings directly in the car.

The MOST LONG-LASTING accomplishment was the PLAN PARCIAL.  Member support, meetings, writing letters of support and membership dues made it a reality.  This plan, outlining restrictions on height, density, footprint size, required off-street etc. was signed by the City as law on September 15, 2012.  All construction permits issued after this date must comply with the Plan Parcial.  There are sixteen mini zones, based on density.  These areas have been mapped out.  We will post the map on our website.

The MOST IMPORTANT accomplishment was the doubling of our membership.  In 2011 the membership was 70.  The total by the end of April, 2012 was 140.  Membership dues mean money and more money gives the Board the ability to get more things done.

Some of the OTHER accomplishments include:

Changed our name to AMAPAS NEIGHBORHOOD ASSOCIATION to be more inclusive; held fund raisers/mixers to augment membership funds to purchase our patrol car.  These events were the beginning of our “Social Agenda”; revamped our Website; initiated regular mass emails to the membership; initiated on-line payment of membership dues; expanded the Full-Building Membership concept (initiated in 2010 by Vista Amapas).  La Cima and Vista Romantica were added to the program in 2012 with Las Moradas and Terraza del Mar joining for 2013.  Other buildings expressing their interest in joining are Selvamar, Renaissance and Villa Tizoc.  We continue to recruit other buildings and request that members urge their boards to consider a Full-Building Membership.

Tom then gave accolades to each of the Board Members for their hard work and dedication in making it all happen.  He presented token appreciation gifts (tee-shirts) to retiring board member, Rolf Engstrom and our “On-Loan” Administrator, Juan Antonia Rubio.  Juan will be replaced by a salaried part-time Administrator.  Tom also recognized the hard work of previous Board Members, Susan Wiseman for her diligence in re-starting the Association and Tobe Jensen for her dedication and hard work during her tenure.

Expenses for the year were $118,260 in operational expenses, of which $47,665 was paid to our consultant, Alfonso Banos, who successfully drove the Plan Parcial through the city approval process .  The police car was purchased for a total of $129,820.  Other expenses were donated in kind, especially by Fusion Gourmet and Taste restaurants, including meeting and event space, and meals for meetings with police and city officials.

During the year, the ANA Board developed a policy for disclosure of financial information to members, balancing the need for transparency against the concern for privacy both of individual members and donors, and of the business and membership rolls of the ANA in general.  Upon request by a member, the Treasurer will release, upon obtaining a pledge of confidentiality, the latest financial information.  This information must be reviewed in person at the office of the Administrator.  We do not email or otherwise transmit this information to protect our association’s confidentiality.  ANA issues reports to all members about income and expenditures after the 1st and 3rd quarters and at the end of the year.

Don advised that all fiscal accounts are examined by DEA Accounts and the necessary government reports are filed by them as necessary for an Asociacion Civil.

Call for a Vote.  Rolf Engstrom  moved to approve the Financial Report.  The motion was seconded by Bill Amundson.  Motion carried without opposition.

Cards and pens were passed out to the members.  Tom requested that members provide the Board with comments of their preferences and opinions regarding the ANA agenda.  We need member feedback to know what is important to our members. He asked those who were interested in volunteering to advise which committee would be a good fit.  We need all the volunteers we can get.

Tom presented a slide listing the Board’s Priorities for 2013:

FIRST PRIORITY-Consolidating our gains and building on them.

Translating and understanding the fine print of the Plan Parcial so that we know exactly what the new rules are; so we can effectively monitor new development; and developing a Convenio (a legal agreement with the City).  The Convenio is to better enforce and maybe improve the provisions of the Plan Parcial.

We need chairpersons and committee members in the areas of Security, Development, Social and Special Events.

Tom introduced Ruben Carillo, a local architect who is acting as a consultant to the ANA. He has prepared a Master “Amapas to-do List”.  The list is a long, expensive list that will not be accomplished in a single year or a single fund drive.  We have named this initiative AMAPAS INFRASTRUCTURE MISSION (AIM).  And our motto this year is AIM Higher.

Ruben presented a slide showing  findings from his street census for improvement and repair.  These projects are:  Road repair on Hortencias and Gardenias (in increments); street lighting; trash bins and collection improvement; landscaping/landslide cleanup; guard rails and other street safety issues.

Tom asked the membership to take a look at this list of items and prioritize them.  Tell us what you think is most important using the cards passed out earlier. The Board will collate your cards and tally your “votes”.  We will then get cost estimates, talk with the City departments to ascertain if we can get some of the work done by the City or in some cases maybe work out an arrangement to partner with us.   Based on your responses, we will get back to you with our prioritized list, ascertain what we can pay for using ANA funds, City labor and/or materials and fund raiser/donations.  Tom closed by saying that together, we will AIM HIGHER to make Amapas a safer, cleaner and more beautiful place to live.

Before Don presented the 2013 Budget, he gave Tom accolades for his commitment and leadership and said that Tom was a real inspiration to the other members of the Board.

Don introduced Jae Palsce as the person to be hired as the new ANA Administrator.  One of her most important jobs would be our liaison with the City.  Jae speaks fluent Spanish and will be a big asset to our Association.

Don advised that the proposed budget is intentionally conservative, counting on only a 24% increase in membership for a total of about 170 members.  Income is estimated to be about $196,000 pesos.  Adding the carryover of about $26,000 pesos from operational and police support funds, our total available funds is estimated to be about $220,000 pesos.  Don was very happy and proud to announce that we had already collected 70% of the proposed budget.

The main elements of the budget are:  (in pesos)

Don explained that it is the intention of the Board to add any additional funds (through savings or fund raising) toward our new AIM Higher plan for 2013.

There was a question from the floor asking “how many units were in Amapas?”  He answered by saying about 2,000 however our membership is only 10%.  We need to recruit new members by working the entire area.  Welcome signs will be hung at our major points North and South of the highway to mark the Colonia and publicize the Association.  Another comment from the floor was made regarding the City’s responsibility to maintain our streets.  Tom answered by saying that we take on patching the potholes for our own safety, etc.

Call for a vote: The Assembly voted to approve the budget non-contested.

The Board has solicited candidates to replace Rolf Engstrom who retired at the end of the year.  Unfortunately we had no takers.  We put in a search and solicited Ben Schatz.  Ben was nominated by the Board and accepted the Board’s solicitation.

Tom introduced Ben to the Assembly.  Ben gave a short bio saying that he was trained as a lawyer, has lived in Amapas for the last 9 and ½ years.  He is also a singer/actor and performs around town as well as the US and other countries.  He is interested in growing our membership and promoting excitement and better communication among our membership by planning social events, such as “Amapas Night Out” at local venues.

Tom asked if there were any other nominations.  There were none.  Bill Williams made a motion that Ben Schatz be elected to become a Board Member.  The motion passed unanimously.

Tom announced that there would be an informal Questions/Answer session for those who have specific questions and or suggestions about our objectives and priorities for 2013.  He advised that our consultants Alfonso Banos (Plan Parcial) and Ruben Carillo (Streets) would be available to take questions.