Over 40 ANA members filled the auditorium at Incanto for an informative presentation followed by a lively question and answer session on April 11.
Real estate broker and AMPI PresidentHarriet Murray, City Hall veteran Ing. Oscar Hernandez (ably assisted by ANA Administrator Viviana Testón), university professor of Urban Planning Alfonso Banos, and local hotelier and developerOscar Moran presented a short course on the history of urban planning (or the lack thereof) in Vallarta, Jalisco and Mexico – essentially, how we got where we are today – the ins and outs (COS and CUS) of permitted construction, and current economic and social pressures affecting Vallarta’s recent growth spurt.
Hot topics were the recent ‘Manhattanization’ of the Romantic Zone, the protections offered Amapas by our Plan Parcial, or not, depending on the willingness of City Hall to respect the rules, and whether Vallarta’s infrastructure is keeping up with the new water and sewer demands resulting from the construction boom.

Some differences between areas with a Plan Parcial, like Amapas, and areas without, like Emiliano Zapata and most of the Romantic Zone, were discussed.  Among them: under the Amapas Plan Parcial, developers cannot ask for an exception to the rules just because some other building exceeded them; also, under the recently passed Article 35, the Planning Department has more discretion in applying zoning rules in areas without a Plan Parcial.

Panelists and ANA members alike expressed frustration at the lack of a coherent Urban or Growth Plan for Vallarta, the lack of transparency in the permitting process, and the sense that unplanned or poorly regulated development is eating away at Vallarta’s authentic charms and threatening to replace its vibrant core with highrise ‘dormitories’ that add to the local tax-base, but subtract from our town’s livability and long term sustainability.

Inspired by questions raised at our Annual General Meeting, this is the second in a series of special ANA ‘Members Only’ informational presentations, which are generously hosted by popular local entertainment venue Incanto.

Now that we better understand the basic rules, ANA plans to have a follow-up Q&A in the fall, and will invite representatives of the Planning Department and SEAPAL to attend.  Stay tuned.

A proposed new seven-story condo tower at the end of Calle Pilitas, where it intersects with Pino Suarez (on paper, anyway) threatens the location of the stairway that historically connected Amapas residents near the highway with neighbors on Pilitas and provided pedestrian access to the beach.

The stairs were destroyed during the construction of 212 Pilitas several years ago and, despite the developer’s promises to neighbors, never rebuilt.

Now, ANA is working with neighbors, including the San Franciscan, Escondido and Canada Romantica condominiums, to get City permission to rebuild the Pilitas Stairs.  We need neighborhood residents’ signatures as proof that we care about the stairs and support their reconstruction. 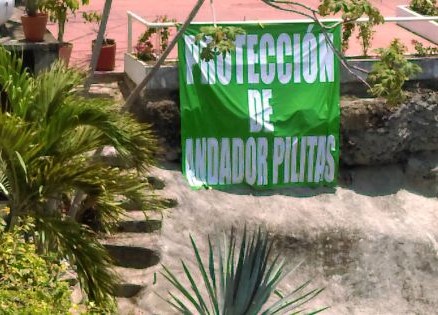