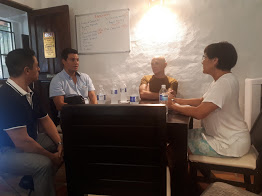 Newly elected ANA President, Sylvia Toy, began her tenure walking and meeting with the presidents and owners of various condominiums.  Taking her job seriously, she is “walking about Amapas” to see and hear what you see and hear.

Condo Escondido – Nestled between Calle Pino Suarez and Pilitas and beside Pinnacle, lies little Condo Escondido with 13 units where she met with Gary Lichenstein, president, and Saskia Geul, owner and building administrator.  Their two concerns were impending growth and the delapidated stairs on Pilitas.  ANA has been working with this group of concerned neighbors since last year.  We are proud to announce that through ANA’s collaborative efforts with the City and a local homeowner, the permit has been granted to rebuild the stairs.  Nathalie Haertling, owner of Art Vallarta, and Saskia Geul are spearheading the needed fundraising to not only rebuild the stairs but to make them a piece of art.  Congratulations!

Real de Conchas Chinas – Across from the Los Pinos Street lies a wide swath of green área divided by the little known Rio Amapas.  Since it is only accessible through Conchas Chinas we had all assumed it was in Conchas Chinas.  Nope.  It belongs to Amapas.

Villas Loma Linda (VLL) – Located directly off the highway and up Calle Hortensias you’ll find Villas Loma Linda, the first time-share building in Puerto Vallarta.  The ANA office is now located in the original office for the time share operation.  Over time the 26 one and two bedroom units have become owner occupied and are now one of ANA’s full-building members.  There are four different towers and two amazing pools at VLL.   Steve Clarke, VLL President, noted that most of their residents and guests walk to and from town; therefore, their perspective is from a pedestrian point of view.  He shared the following concerns:  completion of the sidewalk, crossing the highway, the illicit behaviors at Abedul stairs, development, and security.

La Cima III – Located at the very end of Calle Los Pinos lies beautiful La Cima III.  Built in 2004, La Cima III has 12 floors with two units per floor.  Rhenda Glasco, president, met with Sylvia on an early Saturday morning.  The primary concern of La Cima III residents is with access – through one street – Los Pinos.  Back in the summer of 2014 a landslide occurred on private property at the tight curve just past the highway.  Many residents were concerned because it appeared that the road would collapse at any moment.   Immediately ANA began working with City officials, the bomberos, and the police to determine the safety of the situation, identify the owner of the property, and determine what could be done.

It’s 2019 and what has ANA done?  First of all, the landslide occurred on private property.  This news limited ANA’s ability to intercede without permission.  Secondly, ANA hired a private engineering firm to conduct an assessment.  The City also did one.  Each concluded that the road was safe.

Additionally, Bill came up with some interesting proposals specific to Los Pinos – add wall lights and signage for Los Pinos, installation of cameras in four access points, and the creation of a cross-wide Amapas social hour.  It’s 6 pm.  Go out and meet the neighbors where you live.  Great idea!  Who’s interested?

Villa Tizoc –Sylvia was invited to attend the annual meeting for Villa Tizoc by president Don Bieghler.  What fun!  She got to travel up and down their funicular.  It was a lively discussion and a great opportunity to meet so many people.  Their areas of concern focused on implementation of the new noise ordinance, request for a garbage structure, safely crossing the highway, and development of a green space near them.  They also expressed much appreciation for the highway sidewalk.

Sylvia was able to share information from a recent Gay Pride announcement event and the importance of scheduling a meeting with business owners in the Amapas area.

La Cima I – At the top of lower Hortensias, to the right it splits into Gardenias, and continues as Hortensias to the left.  Smack dab in the middle you’ll find La Cima I with its beautiful gardens and pool.  President Brent Zerull and Sylvia shared great conversations over many glasses of water.

Built in early 2000 the concerns of La Cima I had to do with the side effects of development – construction noise, crime, and the loss of their beautiful view last year.  In the case of La Cima I, a neighboring building added onto their existing structure.  The plans were reviewed against the Amapas Plan Parcial and it was determined that the addition, as originally submitted, had to be lowered.  The addition is now within the guidelines, but it is of little consolation to those units that lost their precious view of the ocean.

Don’t see your building’s name on this list?  Schedule a visit with the president by emailing Sylvia at president@amapaspv.com.